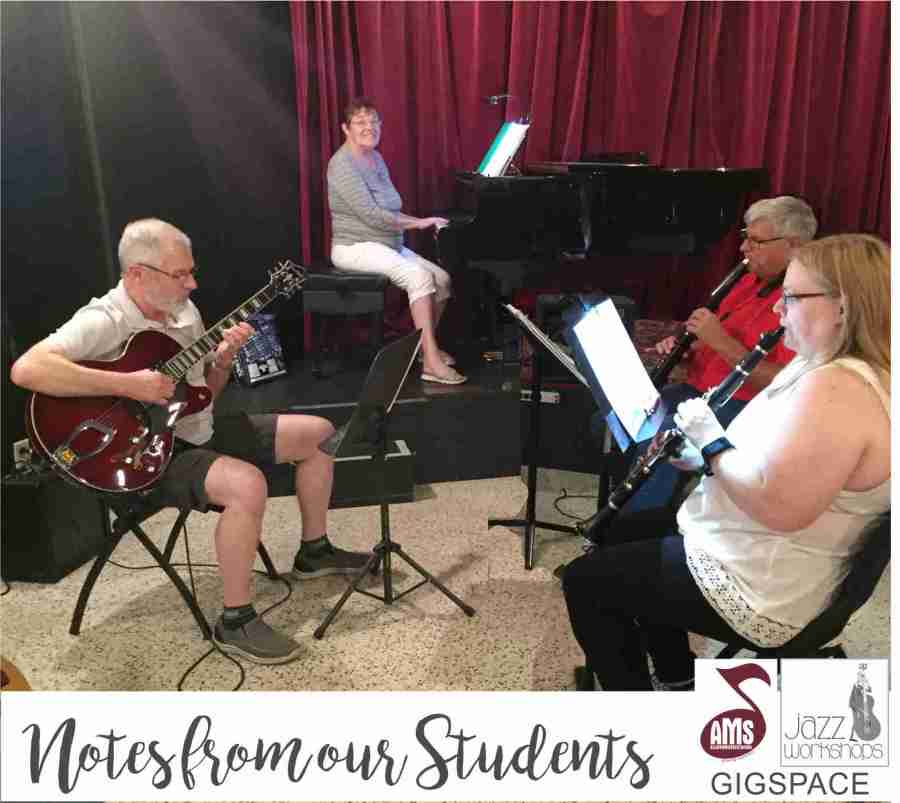 Thank you John for sharing your Jazz Journey with us!

In preparation for my retirement I gave a lot of thought to what I wanted to do to occupy my time and keep my intellectual abilities sharp. I knew moving from a demanding and complex work environment to an unstructured and leisurely lifestyle would, sooner or later, result in a degradation of my cognitive and social skills and I was determined to avoid this as much as possible.

Of all the activities open to me I was always leaning towards those that would allow me to be creative and I was especially interested in doing something with music. I had a life-long interest in jazz and could see myself doing something with that, and I had an interest in learning jazz guitar, but I pushed it away as unrealistic because I had absolutely no prior experience with music theory or playing any instrument. I couldn’t learn guitar at 59 years of age. Or could I?

I was about to wrap-up a 40-year career in adult learning during which I came to believe that people can learn anything they set their sights on. How well they learn a topic and how well they apply what they learn are separate questions, but I do believe people can learn anything. While I was considering my options, I discovered the book Guitar Zero: The New Musician and the Science of Learning. It was written by a research psychologist who discusses in layman’s terms music cognition and developing musical ability, and provides an overview of scientific literature on learning and the brain. This book’s objective is to show the readers they can learn to play a musical instrument at any age and it convinced me that I could learn to play the guitar at my age.

So, just prior to my 60th birthday, I borrowed an old guitar from my sister-in-law and started a 12-week introduction to guitar group course for adults through the City of Ottawa. It was a well-run course consisting of 12 weekly two-hour classes and I realised very quickly that learning the guitar was something I could do. I was learning to read music and to play a few very simple tunes on the guitar; however, I also realised my success thus far was a result of my willingness to practice between classes and that I appeared to practice more than most of my classmates. Therefore, I decided to take the next step and commit to one-on-one guitar instruction and I am very happy that I did!

I researched where to take my lessons and decided on Alcorn Music Studios where I committed to 12 weeks of personalised lessons lasting 30 minutes in duration. During the first few weeks the instructor determined my learning style, and how much time I was willing to spend practicing, and from that developed a personalised learning plan for me. In a surprisingly short period of time I was doing more than I had initially imagined I would at this stage in that I was learning to play songs that were more complicated than those covered in the group course. As well, I could also see where I could go musically and what I would need to do to get there. I developed new goals for myself and plans to achieve them. I have since moved on to one of Alcorn’s weekly one-hour group jazz workshops where I am learning to play with other musicians of my age and abilities. And I also attend the annual five-day Carleton University Jazz Camp.

I am now 65 years of age; I have been playing guitar for five years and have been retired for two years. I have achieved everything that I wanted when I set out to learn to play an instrument and more. Not only can I now read music and play along with other musicians, I have remained mentally stimulated, perhaps in some ways, more than when I was working. Certainly, my ability to focus on a topic is different and more direct than when I was working. It is a musician’s focus and, after a career in adult learning, I find this particularly interesting.

One of the benefits which I had not fully considered was the increase in social activity that comes with playing music in a group. The interaction started with simply discussing jazz in general and our own individual situations in learning jazz and music. It soon expanded to meeting-up for coffee, as well as attending concerts and open mic sessions at local pubs to see our fellow students perform. And, now that I practice in group jazz jamming workshops, we discuss aspects of our recitals including choice of songs, arrangements, and performance.

Getting involved with music has also increased my physical activity because I am out and about going to music events, with or without my guitar and amplifier, either playing music to an audience or sitting in the audience watching others perform.

It is often said that it takes 10,000 hours of practice to master a musical instrument; however, it has been my experience that many people spend 10,000 hours wishing they could play an instrument. I encourage others to stop procrastinating and get out there and start their lessons. I certainly haven’t mastered my guitar, but I have started on a musical adventure and the social and cognitive rewards are wonderful and well worth the effort.